What an amazing day! Today was the second Young Professionals’ Network Conference – this time held in the Science and Industry Museum in Manchester.

Having heard how special last year’s inaugural event in Leeds had been I was particularly looking forward to today’s event – and I have to confess that I was totally blown away.

It was clear from the buzz that enveloped the pre-conference tea and coffee that this was going to be a conference like no other. The energy, the enthusiasm and the passion amongst the delegates was so very real and so very infectious.

The conference programme was split between a small number of ‘headline’ talks, interspersed with a series of focused discussions that run in parallel to one another. The latter gave members of the young professional community opportunities to share their experiences and to set out their thinking on the key issues associated with today’s theme – sustainability and innovation.

Unsurprisingly climate change was a source of much debate, but so too was the need to de-carbonise the transport system. Time and again I was struck by the extent to which our young professionals are seized by the need for action and their desire to be involved in framing the solutions moving forward. We often talk about the importance of providing leadership on strategic issues: well today in Manchester that leadership was on display to one and all.

What also struck me as I listened in on a number of the talks was the extent to which our young professionals are seized by the need to consider the future of our transport system in the context of wider policy issues such as land use planning, productivity and social value.

At the start of the day I had had the pleasure of announcing the winner of this year’s Apprentice of the Year. Readers will recall that earlier in the autumn I had been part of the panel that had met the 8 shortlisted apprentices. This has been the second year running I’ve had the pleasure and privilege of meeting the finalists – it is without doubt one of the most enjoyable days in the year.

Once again the quality of the apprentices had made identifying an overall winner extremely challenging but I was delighted to announce to the conference that Jack Smith (from Arup in Northern Ireland) was this year’s Apprentice of the Year. 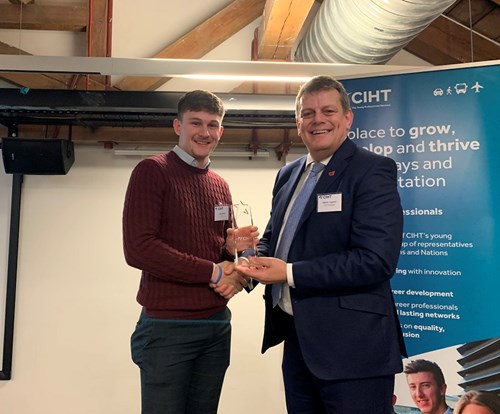 In keeping with previous years there’ll be opportunities for all the finalists to be involved in the work of the CIHT in the year ahead. And I look forward to meeting each and every one of them again at some point in the near future.

Given that climate change – and its implications – had been the focus of much debate throughout the day the irony that for some their trip home was going to be disrupted in part by the effect of flooding was not lost on everyone. It was a timely remainder of the importance to be given to maintaining our existing assets, alongside the investment required to support planned growth.

Experience tells us that many conferences see a ‘drop-off’ in attendees as the day wears on – but that’s not the case with the Young Professionals Conference. The final session – and the post event drinks reception – continued to see delegates giving their commitment. Not even the knowledge that travel arrangements home might need to change seem to dampen the enthusiasm for discussion and debate: rather it seemed to be taken as an opportunity to continue the debate for a little while longer.

Truly an amazing day! Thank you to everyone who made the day so very special.

Comments on this site are moderated. Please allow up to 24 hours for your comment to be published on this site. Thank you for adding your comment.
{{comments.length}}CommentComments