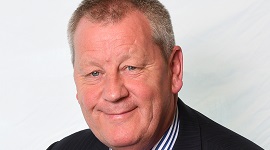 CIHT’s Inspirational Leadership Award celebrates the value of inspirational leadership in the highways and transportation sector. There were many strong entries for this year’s award with inspiration being highlighted at all levels, showing that CIHT values underpin the great work going
on in our changing sector.

The judges felt that Dave Wright was CIHT’s Inspirational Leader for 2018 because of the way he has shared his knowledge across the industry and beyond, particularly around the benefits of collaboration, in such an open and inspiring way. His presentation to CIHT’s Annual Conference in March this year exemplified this. They also felt that Dave’s commitment to inclusivity was an example to others and will have real and lasting benefits.

Since taking up a senior leadership role in 2010, Dave has challenged traditional methods of working, through extolling the values of true collaboration with clients and suppliers, and raising the bar on safety, customer focus and innovation. Initially, some believed this would expose them to uncomfortable levels of openness, and he faced scepticism and disregard. However, his leadership and perseverance paid off, as collaboration is now the norm.

Dave Wright’s business and collaborative partners have recorded many firsts, with numerous awards recognising the value to industry, including a CIHT partnering award for being first to gain BS11000 with the client and supply chain.

Dave recognised that while take up of BS11000 had predominately been by larger organisations, further value could be created by including SMEs. This won another CIHT award and two Institute of Collaborative Working (ICW) awards, with judges saying it had potential to become a global model, following the publication of ISO44001.

Dave’s business subsequently became one of only six organisations worldwide to be awarded this standard on the day it was launched. Dave is unyielding in his resolve to create further
value, by sharing knowledge at a pan-industry level. He writes thought leadership pieces, speaks at conferences (including the CIHT Annual Conference 2018) and has become FCIHT. All this is an indication of how he’s using his voice to inspire people from boardrooms to the coalface.

The nomination also described Dave Wright’s ‘legacy’ as an exemplar of progressive commitment to industry and society inclusivity: The Collaborative Learning Circle (CLC). The CLC is a professional development forum, with collaboration-based e-learning. But Dave’s brainchild is also supporting the OnSide Youth Zones. This unique four-way partnership of private sector, local authority, young people and community, provides life-changing opportunities for young people in deprived areas. Dave’s inspirational leadership has inspired many influential stakeholders to get involved.