Key streets in central Edinburgh were closed to motorised traffic on Sunday, marking the launch of a new campaign to encourage active travel and improve air quality in the Scottish capital. 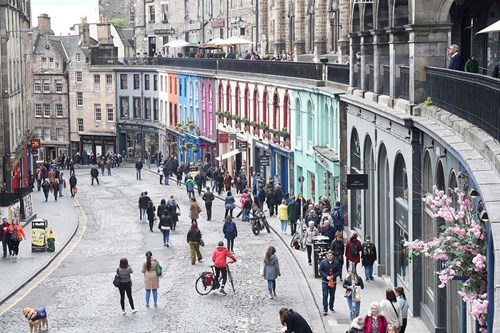 The city is the first in the UK to join the international Open Streets initiative which will see it host regular car free days on the first Sunday of each month, over the next 18 months.

This weekend’s inaugural event closed off a number of routes through the old town between midday and 5pm, with future Open Streets days expected to be expanded to cover a wider area.

Sustainable transport campaigners welcomed the move. Sustrans Scotland deputy director Grace Martin said: “Evidence is very clear that vehicle dominance of our urban environment is a major cause of air pollution. Closing streets to traffic does have a big and positive impact.

“Open Streets is a great initiative to make our city centres healthier, greener and safer places for everyone.”

Campaign for Better Transport chief executive Darren Shirley added: “Edinburgh is leading the way in making its city centre a cleaner, healthier, safer and nicer place to spend time in. More than 40 towns and cities in the UK are at, or have exceeded air pollution limits, so initiatives like this could help them meet their legally binding air quality targets and make a big difference to millions of people's lives.”

Friends of the Earth Scotland air pollution campaigner Gavin Thomson said: “Opening up our streets to people will show us what we are missing by allowing cars to dominate and pollute our public spaces. It would be great to see other councils in Scotland introduce these ideas which are now commonplace across Europe.”

Edinburgh is thought to be the first UK city to introduce a monthly traffic free day. The inaugural Open Streets event on Sunday featured activities including a group cycle and walk down the Royal Mile as well as jazz performances and electric bike trials.

City of Edinburgh Council’s transport and environment convener Lesley Macinnes, welcomed the event’s success and said: “We are wholeheartedly committed to creating an accessible, sustainable and people friendly city.”

Tags Health and Environment Sustainable Transport TP Weekly
Comments on this site are moderated. Please allow up to 24 hours for your comment to be published on this site. Thank you for adding your comment.
{{comments.length}}CommentComments