Concerns about the structural safety of Hammersmith Bridge in west London have led to its immediate and indefinite closure after inspections discovered critical faults requiring major intervention. 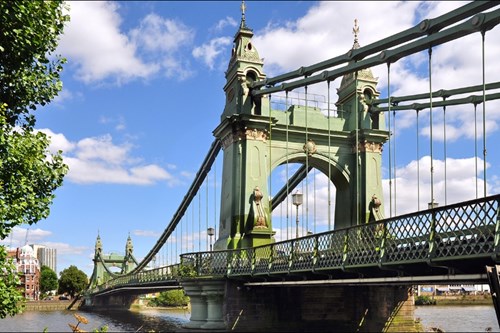 The London Borough of Hammersmith & Fulham took the decision to shut the 132 year old Grade II listed structure, which is a key link across the Thames in the area, at the end of last week.

Before its closure the structure had a 7.5t weight restriction and was used by an estimated 20,000 vehicles every day.

A statement from the council said that, until 2015, 100 buses an hour were travelling over the bridge “which is something it was never designed for and which was the most important contributing factor in causing this level of damage”.

The council said it has been seeking agreement to carry out major maintenance works since 2015, but noted significant cuts to Transport for London’s budget from central Government. The expected cost of repairs to the bridge – which would involve strengthening work and a full resurfacing – is around £40M.

“We are working with the London Mayor and TfL to agree a way forward and call on Government to provide the necessary funding to maintain this vital piece of London’s infrastructure and this beautiful feature of Britain’s engineering heritage,” the council said.

Responding to the closure, RAC Foundation director Steve Gooding said: “On a road network as comprehensive as ours, you might expect that some older bridges on minor backwaters might need to be weight restricted or even taken out of use, but surely, that should not apply to key structures in our city centres.

“Of course, we must look to our highway authorities to ensure our safety is given the highest priority. What the closure of this bridge brings home is the scale of traffic impact and disruption to our travel that can follow – the worrying question is where else similar issues might arise if we fail to tackle the squeeze on road maintenance budgets.”

Member of Parliament for Richmond Park & North Kingston Zac Goldsmith expressed concern over the bridge’s closure. “Hammersmith Bridge is a major river crossing and primary route for thousands of my constituents commuting to and from work every day,” he said.

“We have long known that it faced closure for long term repairs, but despite repeated attempts to make contact with Hammersmith & Fulham Council, residents, councillors and local MPs have been kept entirely in the dark.”

Interim repairs were completed to the structure in 2017 which included replacing 240 of its 999 deck and road surface panels. Further strengthening works are expected to last several months due to the age and complexity of the 210m long suspension bridge.

CIHT’s Asset Management Panel chair James Elliott said: “Resilience of historic assets requires a bespoke asset management approach, and the decision to close Hammersmith Bridge appears to be based on sound engineering principles. The fact that the bridge has had two years of inspections, analysis and interim repairs and is subject to weekly safety checks shows there is responsible stewardship in place.

“The ability of Hammersmith Bridge to meet current and future predicted traffic demands requires a long term approach where the whole life need of the asset is identified and monitored.”

However, he added: “A structure of this significance also needs to have a dedicated rolling funding programme combined with a strategy to manage demand commensurate with its deteriorating condition.”

He considered whether the introduction of innovative funding solutions such as private financing, tolls or crowd funding could enable better proactive maintenance of the structure than current arrangements.

A Transport for London spokesman said: “We are working with Hammersmith & Fulham Council to identify a final plan for upgrading their bridge. We are also ready to support them in identifying the necessary funding for this work.

“Keeping local authority infrastructure in good condition is essential to ensure the wider road network stays safe and productive and helps the economy grow. We need the certainty of a long term steady and sustained funding arrangement to allow London to cover the costs of its own infrastructure maintenance.”

(Photograph: George Rex and licenced for reuse under this Creative Commons Licence)

Tags Infrastructure - Construction & Engineering Health and Environment Bridges TP Weekly
Comments on this site are moderated. Please allow up to 24 hours for your comment to be published on this site. Thank you for adding your comment.
{{comments.length}}CommentComments